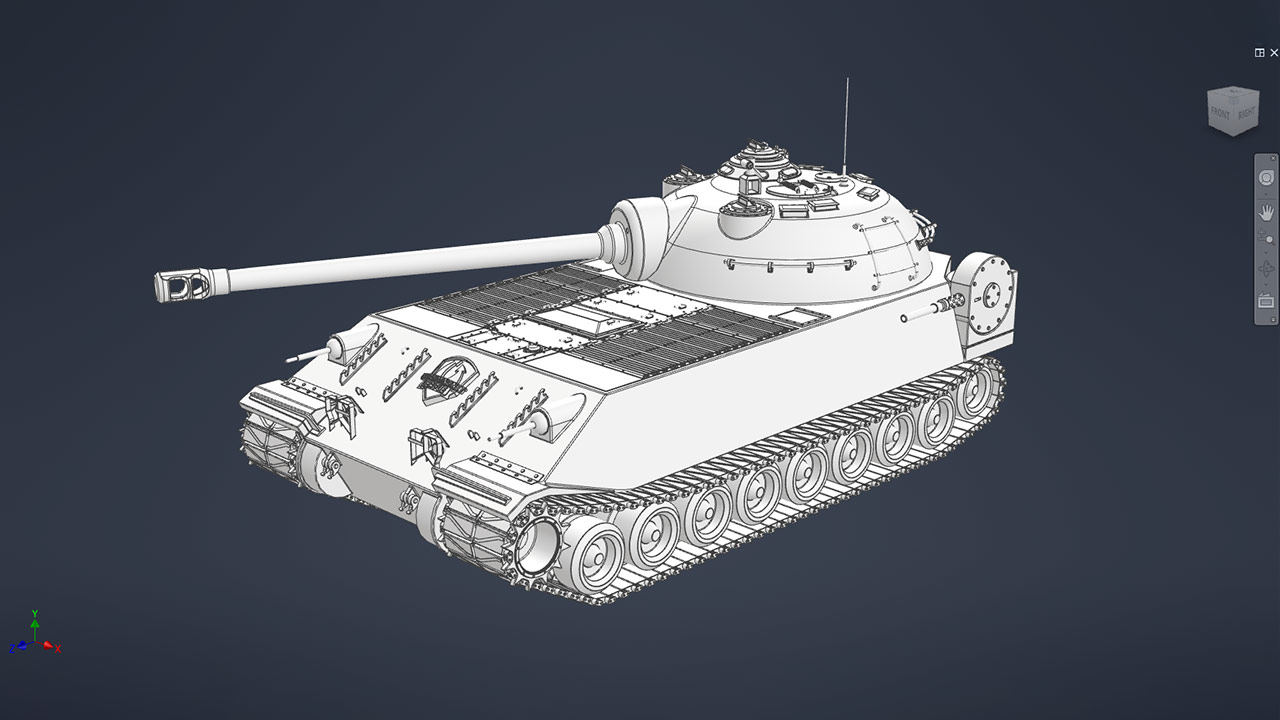 “Chrysler K” is a project of Chrysler Corporation, that was developed in the summer of 1946. The vehicle featured a number of design solutions that were not typical of U.S. tank-building. In particular, the “Chrysler K” was to have its transmission and engine located in the front, and the armament compartment—in the rear part of the hull. All crew members would have sat in the turret. It is thought that this project was the first U.S. project to position the driver in the turret. It was not supported by the army due to limited funding.

The design of the tank was ready for the beginning of the summer of 1946 under penalty recently entered service with the Soviet Union, IS-3, the company ranked eighth for the production of military products in U.S. Chrysler Corporation.

The tank was equipped with a 1200 horsepower and 105 mm Cannon and had a weight of about 60 tons. However, due to lack of funding, the project has not received the recognition in the army and was frozen.

The project I began was to recreate a 1946 Chrysler K GF American Cold War Tank in every detail and for that, i used Inventor, 3ds Max, Substance Painter and Marmoset Toolbag.

So, for a project of this kind, it always starts with collecting references. There are few items that altogether makes a whole, and each one of those things has to be spot on.

First step was blueprints: there is only one side view, but it’s ok, i use symmetry then lined up in the viewport. (Above)  At this stage, it is crucial that it can all be overlaid and match exactly, so as not to run into errors later on.  There can be minor differences that will get sorted out later when all the elements are in place, and that is common enough. (Below)

After that, it is a hunt for references.  Here it is “Google-ing” and a lot of screenshots from game.  All in all, I ended up with a couple of images and found I needed more all the time.  This tank has never produced before, so it has to be a guesswork. It can be tricky finding photos of something specific, but it’s part of the process. It depends on collecting how much as you can.

After that stage, it continues with creating of the main areas.  For instance the body and tracks, which at an early stage merely would be a very rough shape for placement.  Following that, the body itself is the next stage – the turret, the 105mm main gun, machine guns, wheels and their various items, such as spare tracks on the front and back, lamps, antenna, and grills on the hull.  This is just to get something down to work around, and to place the parts of the tank at a time where there isn’t too much to undo.

Once this is done, basic version is created step by step.  At this point, it is crucial that you’re really looking at what something looks like.  Often enough there are simple shapes behind what can look complex, and at this point, it is good to spot exactly what is going on.  The turret is a good example of this: it isn’t a dome shape in itself.  It is a dome that has been pulled forward – almost like a drop, and shaped to serve as a guide for the barrel guard.  There are ‘cuts’ in the metal – almost like a cheese scraper, having crudely sliced through the chunk of metal.  Here, the blue prints stops being useful until later, and by now it’s time to bring in the photographs.  Cross-reference all the time.  Ask yourself, “is this really how it looks?”

During this, it’s good to work smartly.  Can you make an item once, and re-use it?  The treads is one part, which was textured in 4 different variants, so as not to get obvious texture repetition.  That can then be mixed up on the tread line itself and rotated, and mirrored for further variation.  The wheels were made once, per wheel, and then rotated, and copied to the other side.

As you see above; “Chrysler K GF” dyed in the traditional black and put the logo Grand Final (GF), which means that instead of the expected light tank, the American heavy tank level 8 is dedicated to the Wargaming’s Grand Final in 2017 in Moscow.